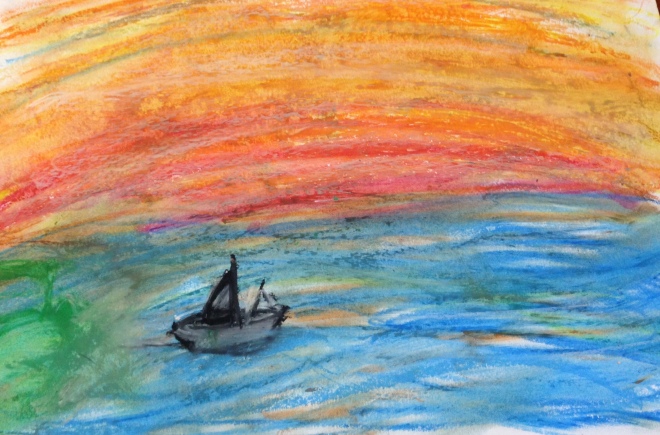 Jamie woke up like he did on a daily basis to the sound of the six o clock wake up siren that day. The sky was grey outside as it was everyday. There were no bird calls… Only the blaring voice from the speaker:

Quickly run out of your door.

Come out and stretch,

It’s time to wake up and fetch.”

Every morning the loudspeakers blared this rhyme repeatedly. The citizens of Aurica were expected to file out of their homes and do stretching exercises at the start of each day.

The Earth had been divided into four zones after the Third World War. Aurica was one of the zones. Countries no longer existed. Some of the smaller landmasses had gone under water due to global warming and climate change. Blasts from nuclear weaponry had destroyed large parts of the Earth. Lot of the tracts were unusable from contamination. The number of people had also become a quarter of what the population was in the 1990s, when they had the war. Everyday, somebody died of diseases borne of lack of hygiene, new unexplored viruses, contamination and more bomb blasts.

The four zones were always at war for possession of the contaminated landmasses. People lived in broken, old quarters. Only the ruling classes lived in luxury.

Jamie lived in a dilapidated hostel for young people. It used to be a beautiful housing complex before the war. The bomb blasts had reduced large parts of it to rubble. Plants and vegetables only flourished in some parts of the countryside left untouched by nuclear radiation. Food was always scarce.

Jamie was a scrawny, underfed man of 25 years of age. He wore thick glasses as his eyesight was weak. He was always hungry for food. If it had not been for some of the fantastic dreams he had been having, he would be very miserable indeed. He hated the war. Somewhere, at the back of his mind, he felt Aurica had seen better days before the bombs wiped out not only large tracts of land but technology for the benefit of mankind. It had wiped out books and education. The rulers rewrote history for the benefit of retaining their power and stronghold over people. Democracy gave way to tyranny. The only technologies that survived were for making weapons. Everything seemed to be covered by grey ashes … Or was it dust from the polluted air?

Jamie, like many others in Aurica had this persistent cough. As he rushed out into the courtyard with a stream of young people for his morning stretches, he was thinking of the strange dream he had last night. In the dream, he was riding on a white fluffy cloud with a girl with a pale face and black hair. The girl looked a bit like him. At the end of the distant sky was a rainbow. As they drew closer to the rainbow, the sky turned red and gold. Below was a huge water body with a tiny boat on it. Beyond he could see some strange green vegetation on an island… The dream was absurd. How could you ride a cloud and who would go with him? Most of his comrades regarded him as a freak. They tolerated him out of pity. He knew he was a little different. Sometimes, he felt he could hear what others were thinking. But, he dared not mention it to any other Aurican. Exceptions were never tolerated well in Aurica. Mediocrity flourished.

“Jamie, be focused! Stretch your arms up in the air and jump!” blared the voice of the community leader from the loudspeaker. A community leader led all the group activities in each of the residential communes, including the morning exercises.

Jamie as usual was wandering off in his mind. He quickly closed his mind to the dream and started on the stretches. He had to be at work within the next two hours. He worked at a weapon’s factory. He used to help operate a robot to assemble some parts of a gun. There were ten in his group. Now, about five men did the job of what had been done in the past by one man. The number of jobs had reduced as a result of the ongoing wars, it was given out. The salary was split proportionately. This way everybody had enough to fund their own food and clothing need. Every person needed to work to get his ration of food, clothing and shelter.

Children were community property. They did not live with their biological parents. In fact, they were not given a chance to know their biological parents. There was no concept of a family. Children were trained to fit into appropriate slots in the society. They were taught to be cannon fodder and tote guns from the age of seven and given some basic training in reading, writing and arithmetic.

Jamie had a premonition that something strange would happen that day as he put on his clothes and ate his ration of watery oats and salt. He had it mixed with the ounce of milk that was a part of the morning ration. He downed his meager meal with some watery tea. Coffee was served only on festive occasions. Jamie sometimes felt that there was a time people could have plenty…but where and when and how… He did not know.

“Look at the nerd! He is gaping more than usual,” shouted their group leader, Broadie, as Jamie clocked in with his card. Broadie was the ideal male, strong, big with a bull like neck. He had a ruddy face and was always nasty to Jamie. He smelt of sweat and grime. Broadie started making goldfish-like movements with his mouth, pretending to imitate Jamie. Jamie kept quiet and went ahead with his task. He had a long and trying morning.

In Aurica, the workday lasted for only four hours as the second shift came in after lunch. This way double the number of workers had jobs and the problems caused by unemployment were whittled down. Though jobs were fewer than before, more workers had jobs and all lived just above the brink of poverty. The workers were always worried about surviving bomb blasts and having enough to eat and live. Jobs were determined by the community’s need. Passions, thought or creativity was a thing of the past. People out of the ordinary were regarded as freaks.

When Jamie clocked out at 1 pm in the afternoon, he was glad to leave. However, instead of going for lunch and then for a group activity as he was expected to do, he went for a walk. In Aurica, four hours were spent at work and the rest of the day in doing community service or some other group activity. You could choose what you wanted to do. The norm was to be with a big group of people all the time. Going for a walk in the countryside or what was left of it was considered freakish.

Jamie felt he could hear a voice calling out to him and telling him where to go. He walked out of the city and towards the country with its grey soil and scrubby vegetation. The sky continued grey.  People had almost disappeared from the lonely countryside. Suddenly, at a distance, he could see some strange figures. They were wearing masks. In the afternoon light, he noticed two of the figures wore shower caps on the head too. They seemed to be moving towards him. There was nowhere to hide. Jamie started feeling a little apprehensive. Who were theses strangers? The voice in his head was asking him not to be scared and to go towards the little group.

The group moved forward towards him. As they neared him, one of the girls took off her mask and cap. She was the girl of his dreams, the one he rode on the cloud with.

The girl came forward and said: “Hi! My name is Jasmine. I would like you to meet my friends.”

He stared at her nonplussed and open mouthed. He looked ready to faint for fear. Here was a beautiful girl inviting him to meet her friends!

Then he noticed a strange creature peeping from behind the girl. It was JaJa.

“Who are you and what is that?!! Who are you all? Why are you calling out to me?” shouted Jamie in fear.

Jamie was wondering if he should run away from the bizarre group even though the voice in his head was trying to calm him and asking him to stay.