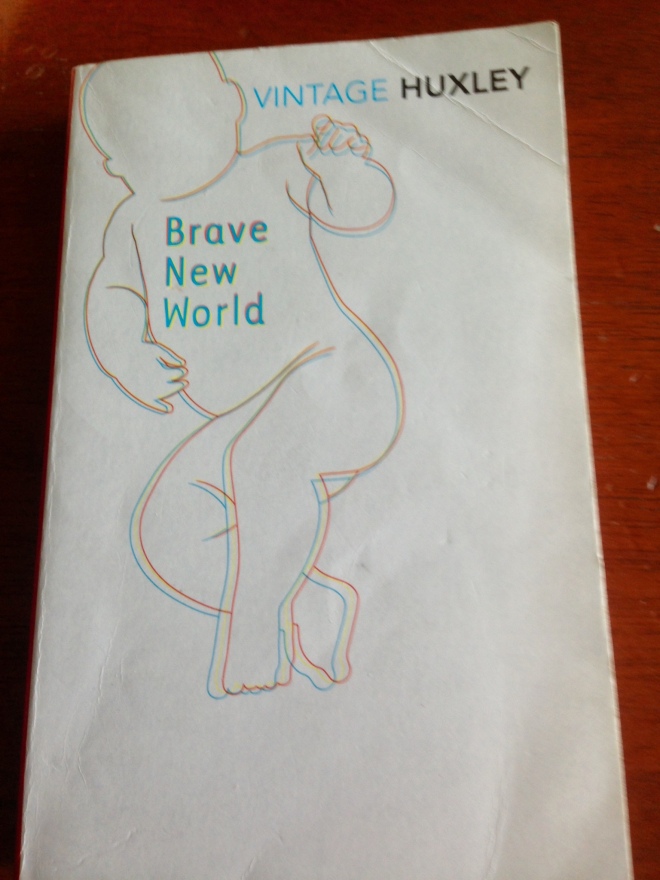 Published in 1931, Brave New World has been rated as one of the most popular classics over time. To me, it is a book that is becoming alarmingly real in the current day context.

The protagonist, Bernard Max, suffers because he does not fit in. In a society where babies are mass produced in bottles and conditioned to fit their job description, Max is too short for an Alpha male, Alpha being the highest caste classification in the Brave New World. The classes go up to Epsilon. Epsilon creatures are almost sub-human twins. One Alpha or Beta is made from one fertilized embryo. In case of the others, each embryo is split into multiple embryos, given less gestation time and made so that they become subservient genetically. The Alphas and Beta are at the top,the white collared workers, the Gamma, Delta and Epsilons are blue collared workers who satisfy the needs of Alpha and Beta.

The civilized world sees family, marriage and parenting as obscene. The Alpha and Beta are also taught what to think through hypnopaedia,rhymes and games. Hypnopaedia, rhymes and games are used on all children  out off bottle and nurseries to educate them into civilised beings.

Towards the end the Controller, the ruler of the civilized, tells us that Happiness is never grand . To create a peaceful society after a chaos of nine years of war, the Ford (replaces God) and  the Controller take over the process of living. They controls births, deaths and even, human intelligence with the help of Bokanovsky’s process. The Controller makes sure the Alphas and Betas think right. If they think out of line, they are exiled to a distant islands, like Iceland and Falkland, where they can pursue their passion undisturbed by civilization.

Most of the civilzed view this as a punishment as they are kept happy with shallow entertainment, a few grammes of soma ( a hallucinogenic drug), and promiscuity. The society forgets to question any move of the Controller and lives lulled like in the land of lotus eaters. Literature, passion, religion, science, beauty have all been sacrificed for a  civilized society. Science is allowed only to serve the needs of the society as is literature, which is reduced to cheap, feelies, movies with physical sensations. Books, like Shakespare, the Bible, which can make people think or emote passionately are all banned. Wanting to be alone is seen as abnormal.The Controller explains

But industrial civilization is only possible when there is no self-denial. Self-indulgence up to the very limits imposed by hygiene and economics. Otherwise the wheels stop turning.

All this is told to a  savage, a child born naturally to civilized parents and brought up in an Indian reserve. He opts for leading his life away from the civilization of the Brave New World. Because he thinks differently, he is hounded even out of his isolation till he finally hangs himself in desperation.

What I find fascinating about this book is that when mass production was still at it’s infancy, Huxley could sense how it would generate a pop culture which would dominate mankind. He could sense that to be different would be an issue. Life would be so fast that people would have no time to think. Then are we heading towards Huxley’s nightmarish vision of a dystopian world?

Or, perhaps,  there is still hope. There has been something called a slow movement. I heard a TED talk by Carl Honore, the author of In Praise of Slowness(2004). He was talking of slowing down and taking time out for things that are important. Perhaps, if people slow down and start to think, we will find a way out to Make our earth an Eden, like the heaven above in Julia Carney’s words(1845) and move away from Huxley’s premonition of a dystopian civilization.