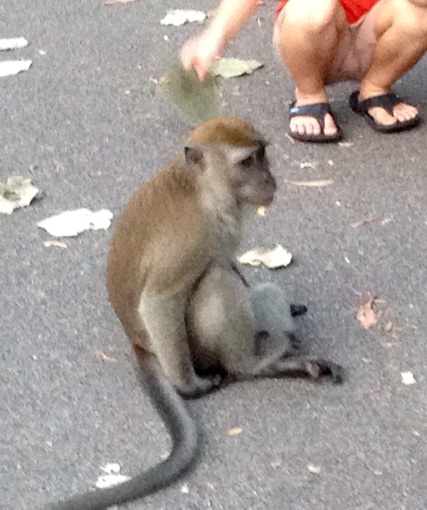 A monkey sat and watched the passers by in the middle of the walk with thoughtful eyes. A little boy was trying to hold a conversation with the creature…the monkey stared at the child with a patient look. Passers by were taking pictures with their mobiles. I was returning home from a walk by the waterfront and paused to take a picture too.

Every now and then, I see otters at play in the ‘river’ in front of my home. They dive and they swim in the fresh water reserve. One of them even likes to pose for cameras! Earlier the fresh water reserve was a sea inlet and was called a ‘river’. The name has stuck to this water body, which has a walk lining its shores up to the sea. A decade or two ago, we used to have schools of small shiny silver fish jumping in the water during high tide. I do not know the scientific name of the fish but we christened them the jumping fish…Now, they have been replaced by fishes that don’t jump, otters and turtles.

We also see a variety of snails and birds fishing by the river. The snails lay eggs that look very pink, almost the color of a flower! Especially visible by the river are a herons, egrets and kingfishers. A Brahminy kite glides in the sky every now and then. I have even spotted a koel on a treetop from my window at home, sitting by the river and calling out…somehow the koel’s song always reminds me of the cuckoo in Wordsworth’s Solitary Reaper.

A voice so thrilling ne’er was heard

In spring-time from the Cuckoo-bird,

Breaking the silence of the seas

Among the farthest Hebrides.

The other day when I was returning home from my evening walk, a monitor lizard crossed the jogging track on its way to the river. It gathered a number of joggers. Some took pictures and some merely watched.

Now, you must be thinking I live near a zoo or in an animal reserve.

I live in a flat in the heart of Singapore. Many perceive this city as a paradise for shoppers and a place lined with cement brick and mortar. Almost half of Singapore is green (47 per cent) according to a research published by an online website (http://www.skyscrapercity.com) whereas Shanghai has 2.6 per cent of greenery, Mumbai 2.5 per cent. New York and San Francisco have greenery below 20 per cent! And in the 47 per cent greenery, live birds and animals in harmony with man and nature.

Each morning, I wake up to bird songs. I watch butterflies flit from the yellow angsana flowers that cover the heads of the trees near my home. If the butterflies are yellow, they almost seem like flowers taking flight. White and pale green butterflies do stand out.

The other avian visitors near my home are sunbirds, pigeons, mynahs, doves, orioles and flocks of parrots. The orioles blend in well with the yellow angsana blooms and like the butterflies, seem to become a part of it. Parrots on the top of trees look almost like quivering leaves. The only issue is they make so much noise that you know there are parrots out there somewhere…they can also be seen in the seaside parks squawking and flying from tree to tree! Sometimes they fly in huge flocks across the river.

Once, one of my neighbors had a sunbird nest in her balcony garden. It was a little yellow sunbird with a nest made of dry leaves and twigs… such a quaint sight!

We discovered snakes sometimes live by the sea. One evening, when my children were renting cycles from a shop by the beach, we saw a green snake entangled amid some vines outside the shop. It almost looked like an extension of the plant! Later on googling, we found it was called the oriental whip snake. Evidently, a family of whip snakes nested near the shop and the shop owners let them be… live and let live was the motto they adopted!

Pigeons and mynahs often take sips from our swimming pool. Every now and then, we have white pigeons among the grey. Thankfully, in our condominium, we only have bird visitors. I heard a monkey went for a swim in the pool of a neighboring condominium on a hot day!

Why he opted for the pool when there is a fresh water reserve right next to the condo is something that remains a mystery… maybe the monkey liked the color of the pool. After his swim, he felt peckish. He found a table laden with food in a home with open windows. He helped himself. Unfortunately, humans draw a line at sharing their meals with monkeys and they were forced to call authorities to help. I believe, the monkey has been relocated to greener pastures!

Monkeys are a common site in most nature reserves in Singapore. We have had monkeys relaxing on the roof of our car when we were returning from a walk in a nature reserve one day. Ducks, swans, crocodiles and mudskippers can also be spotted in some of them. Of course one has to be careful in reserves with crocodiles. Reserves with crocodiles do put up signs that ask one to watch out for these creatures. One good thing is most Singaporeans who visit these places are educated enough not to tamper or tease wildlife. These creatures live outside the realm of ‘tourist spots’ or zoos, in places more frequented by the local population. Sometimes you can see flying squirrels leap from tree to tree though they are less common than normal squirrels or monitor lizards.

I have seen a mynah frighten a monitor lizard as it strolled across a lawn littered with picnickers on a Sunday afternoon. The mynah squawked and pecked near its eyes till the monitor lizard found shelter under a fern and rock overhanging. A crowd gathered to watch our tiny, feathered friend object to sharing the lawn with a lizard that was more than ten times it’s size.

Monitor lizards by and large seem to walk around freely. I remember, one rainy day, we had a huge traffic jam in the road outside my home. The jam had been caused by a monitor lizard parking itself in the middle of the road! Cars had to wait for it to cross, pretty much as we did in Kruger animal reserve in South Africa. Of course, there it could be monkeys, zebras, kudus or elephants crossing. In Singapore, it was a jam caused by merely a monitor lizard!