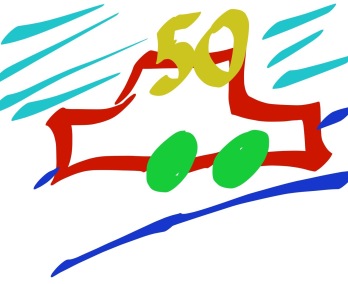 What was it like to wake up the day after having crossed half a century?

Did I become wiser, greyer, more dynamic or more decrepit?

I woke up looking forward to finishing the new play on Harry Potter co-authored by JK Rowling. It was again a racy read after many days. I also reached a new high score while playing Sudoku on my ipad and started writing this piece.

Many might say what frivolous preoccupations or how childish! But, believe me, nothing could be better than tucking up with a new Harry Potter at the end of half a century of earthly existence.

The last decade I walked the Great Wall four times, wrote and published my first book, fought with publishers (a number of them), decided I preferred being labeled a mom and wife to all things. By thirty, I was a first time mom and by forty, I had two kids. Thirty to forty was a great decade…went frolicking with my twosome and did things with them, for them and appreciated handiwork by them. I tried being a democratic and docile parent and my sons appreciated it by telling me I had the makings of a great dictator! The thing is most kids would not tell their mother that they were like dictators. Mine could, did and still do!

Twenty to thirty was the period I fell in love. What could be more enticing! I also published poetry and many pieces of somewhat immature writing in newspapers, quit journalism in disgust…went to universities, did theatre, travelled on university funding (a profoundly happy experience). Ten to twenty…I grew up…climbed trees, broke rules, had fun, almost got kidnapped once, fell down a number of times, fought with people, made some fabulous long lasting friends who never forget to greet me on my birthdays and wedding anniversaries. Zero to ten… I dreamt, sang (a trifle off scale) sitting on trees with my best friend (who sang more out of tune than me), danced, played games and pranks, fought and generally thought I would turn into a blonde-blue eyed princess when I grew up.

I definitely did not turn blonde unless you can refer to my silver grey hair (which I dye dark) as ash blonde…and my eyes remained a steady brown but I lived my life the way I wanted, the way I thought was right, with personal integrity. I lived out my dreams…a trifle differently perhaps… always wanted to write a book on China and did.

I keep writing … have done that from grade three. I miss writing when I don’t the way you miss a favourite TV show.

Now, as I browse over the old Harry Potters and write about the magical completion of my fiftieth year, I wonder if Nicholas Flamel of Philosopher Stone fame felt as I do. Did he also think that fifty was the start of life? Did he want to learn on at fifty? After all …. I just feel I am at the brink of life in its prime. In some Asimov’s, there are people that are a few hundred years old. So, fifty is really sixteen for them! Even in Hobbits, adulthood starts very late in years compared to our current society. So, life does start at fifty and learning an essential skill at that age is just great! The essential skill that I talk of is driving!

One of the reasons I do not possess a valid driving license is that driving instructors do not quiet appreciate my skills. I am very considerate. I was one of those people who stopped in the middle of a road (in the training school) when I saw a trainee driver driving in front of me. I merely gave way to a newcomer. My instructor mistook my consideration for panic!! He assured me what others achieved in five lessons, I would not achieve in fifteen. He did not appreciate my concerns about the other driver’s nerves.

Obviously, the instructor did not know my father used to get jumpy when I drove at eighteen. I had a valid driving license then. And somewhere along the way it expired and I had my husband to drive me…Finally, when I went for a refresher course, my instructor lacked the necessary attitude to teach me! Then, because I was expecting a baby, the doctor banned me from driving. I think I saw my instructor heave a sigh of relief when I gave him the news. Then, we moved to China where we were not allowed to drive but were given a chauffeur driven vehicle 24/7. Being docile and obedient by nature, I was happy to comply!

The joys of being driven is great! You never need to know the way to anywhere. You do not need to know left from right. This has always been a challenge for me. My husband has his first ride on the bike with me indelibly etched on his memory… He was driving and I was directing. I was saying right and pointing left. He figured out early in life left could be right and right could be right too. And left could be left or right. After all these are all names. And as Shakespeare said in Romeo and Juliet:

What’s in a name? That which we call a rose

By any other name would smell as sweet.

My husband had it all figured out then itself…. more than twenty-six years ago….before we tied the knot.

He used his common sense. There was no right turn and he turned into the only available turning, which was on the left.

Now that I am out of China, I have resorted to taking cabs when I go out on my own. I figured out cab drivers are not familiar with Shakespeare. The problem with cab drivers is that they ask for directions and get angry when you give them your own directions. They seem to lose their calm if you say left instead of right. They get even angrier if you mix up names of places and roads!

It has come to a point where I am thinking of self-reliance as an option. What better age to start at than my present one … fantastic, fabulous fifty!

Surely, despite automatic self-driven cars, my newly acquired driving skills will be well honed by the time I hit a century!