Vincent Van Gogh severed his ear when he got into a fight with Paul Gaugin, a friend and a fellow artist. He painted a picture of himself with a bandaged ear and died regarded as a pauper and madman. Paul Gaugin fared hardly any better in his lifetime. And yet now, their art is seen as priceless.

In music, Salieri was better regarded than Mozart… and yet Mozart lives today when the only place one gets to hear Salieri’s music is in Amadeus, the movie on Mozart’s life.

The Great Gatsby by F. scott Fitzgerald was regarded as ‘ tawdry’ and ‘ absurd’ by the media when it was published and Joseph Conrad’s masterpiece, Heart of Darkness, was dismissed as a ‘minor’ work by critics. And yet both of these have later been made into Hollywood films and popularized.

Did these writers or artistes compete for the top billing?

I think not. But they created what they felt from the heart. They created with passion. They had no intention of double spacing or typifying their art forms or giving exams and fitting it into a mold so that it could get the first place or be selected for an exhibition or a book or magazine by a publisher.

Being a person who enjoys experimenting with words, enjoys the rhythm of them, the feel of them, the sensuality of them, the power they possess and the passion they can generate, I want to share why I do not feel creativity can be measured by competitions.

Creating for me is a form of worship. Each time I try to create perfection. And each time I fall short. Each word I write, each piece I write is from my heart. It is an offering to that energy of which we are all a part, of which each star, each planet is a part.

When I write a journalistic piece or a review, it is with a different perspective. It is written to inform. I have an editor who hones it to perfection for me. A piece that is published ceases to be mine.

Creation is different from publication or limelight. Creation is the process of ascending above the existing world and getting in touch with that part of yourself that wants to soar with endless freedom across the open spaces of the universe, that wants to burn like a flame and rise in a crescendo to a world that only can be described as ecstatic, to give a sense of boundlessness to the spirit…I try to capture this ecstasy in words. Sometimes, characters visit me in dreams. I have to write about them otherwise they keep haunting me. Sometimes lines come to me and if I do not put them down, I lose them. Then I feel incomplete and irritable. Thus, the need to create or express can be painful and intense. The outbursts of lines, colors and people happen naturally. They take me to that point from where I can see a world that is different from what most perceive.

When I was in my teens, my friends used to tease me that I viewed everything differently from others… now people tell me I live in a different world far removed from reality. But that is my reality.

Creativity can be seen as a form of madness or delusion that whirls and twirls you around the world, that helps you rise above the mundane and experience a joy that is beyond competitions and exams as well as torture you to perdition if the right words do not come your way. George Bernard Shaw does a good job of putting it in perspective,

When you try to relate that dream to others, you create an art form or a poem or a story or an essay…

That is why I feel creativity is beyond judgment, beyond competition.

Creativity just happens. Trying to earn ones living buying, selling or teaching creativity can be daunting. You can sell an idea, a piece of information, a painting that someone likes, a novel that many enjoy. These might be the products of the creative process.

When one competes to write a story or a poem for a competition only to win and starts looking for profits in creativity, one compromises oneself. A creative product may not be highly popular when it is born. People may or may not like your experience or the expression that one gives. The world may not be ready for it as yet. But if you can continue practicing the expression for the love or joy it generates or out of a sense of compulsion, maybe the masterpiece will happen.

The famous American writer, William Sidney Porter or O Henry, has written a story called The Last Leaf, which describes the whole process of creativity and masterpiece to perfection. The story is about a failed crusty old artist who painted the last leaf on a tree to give hope to a young artist and help her survive a bout of pneumonia. The young girl was under the delusion that she would die when the last leaf fell. Behrman, the old artist, has been described as such in the story.

“ Behrman was a failure in art. Forty years he had wielded the brush without getting near enough to touch the hem of his Mistress’s robe. He had been always about to paint a masterpiece, but had never yet begun it.”

He dies painting what one of the characters describes as his ‘masterpiece’.

And this is what I feel is a masterpiece, the swan song of our lives. Once you achieve it, perhaps it will be difficult to replicate… I do not know. Or, maybe, it can be repeated. Though I must say after reading all the wonderful Harry Potters, JK Rowling’s other books leave me dissatisfied.

Creativity should be viewed as Edgar Allan Poe’s Eldorado, elusive, mythical and enchanting… not for sale but something that many of us seek and do not find, the ultimate source of joy, not of mundane fame. It cannot be trapped into a bank vault. It is a divine union, a gift that fills our being with joy and light. There is nothing before or after. It is the gift that touches the beauty in our being, bringing us closer to the eternal Creator of all mankind. It is the song that flows from our soul, primeval, beautiful and fulfilling. 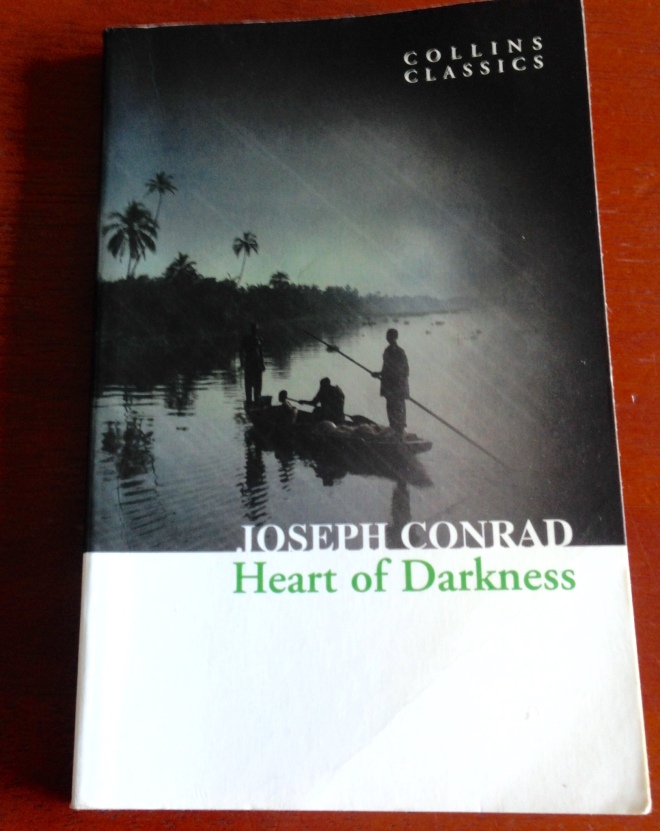 Heart of Darkness was first published in 1899 as a three part serial in Blackwood Magazine. It is the story of a journey of exploration on the river Congo into the heart of Africa. Though the book has been condemned by some as a misrepresentation of the country, I would see it more as a journey of the protagonist, Marlow, into his own inner psyche, which is critical of the colonial culture among other things.

In the beginning of the story, Marlow states,

The conquest of the earth, which mostly means the taking away from those who have a different complexion or slightly flatter noses than ourselves, is not a pretty thing when you look into it too much.

Marlow continues to have this stance through out the book as he journeys into the heart of Congo in quest of the elusive Mr Kurtz, who was not just an ivory trader but also  a remarkable man. When he finds Kurtz , the legendary figure is sick and on his deathbed. He gives Marlow a bunch of letters from his fiancee. Finally, when he died, he cried out  the horror, the horror. Was he denouncing a horrible vision he had, or the horrible life he had lead, or the horror of dying in the way he did? Just before he uttered these words, Marlow, who was with him  on the journey back , describes his last facial expression.

I saw on the ivory face the expression of somber pride, of ruthless power, of craven terror — of an intense and hopeless despair.

Kurtz had been also doing a report on Suppression of Savage Customs. Just as the conquistadors in South America had exterminated the local population for gold, glory and God with advanced weaponry, the ivory traders were intent on conquering the local population for ivory, glory and God. Anything unfamiliar was seen as savage and, therefore, bad. It had to be replaced by customs acceptable to the ivory traders and invaders. To me, through this story, Conrad has successfully exposed how invaders not only loot the invaded country off it’s wealth but also destroy the local colour and culture.

Kurtz ‘s was an impenetrable darkness. The darkness highlighted in the book, I would say, refers to the blackness of the ivory trader’s  psyche which sees anything different as negative. It also refers to the intent of the invaders who defeats the local population to harvest their resources, in this case ivory, and drain the conquered country of their wealth. Darkness refers to the ignorance and obtuseness of the invader to the needs of the invaded, who living in harmony with the nature around them, have evolved a culture and lifestyle best suited to mankind in that environment. What goes on in the the name of development is a cultural imposition and not a harmonious cultural intermingling. And this is something that Conrad has critiqued repeatedly in this book.

Marlow himself fell sick. So, all the perceptions he has about the locals are from the perspective of a semi-conscious sick man. He had to be nursed back before he could return the letters to Kurtz’s fiancee, who is absolutely in the dark about Kurtz’s cruelty and viciousness( Kurtz had shrunken heads of natives on poles at a certain distance from his post in Congo). She only sees Kurtz as the penniless lover who went into Africa to make money and, thus, be accepted by her family. She says, Men looked up to him( Kurtz)–his goodness shone in every act.

Marlow keeps her in the darkness about his last words too and says he died with her name on his lips because she wants something– something–to–to live with. She is also the opposite of darkness and her hair glows with a golden light.

This is a book that makes me think. It makes me wonder if development means the same thing to all the people of the world, if what we judge to be good for ourselves would be good for others. To me, it is a cry for tolerance of things unfamiliar and new. It is a call to be positive and open to all cultures, religions, races and life.