Published in Countercurrents.org on June 7, 2020 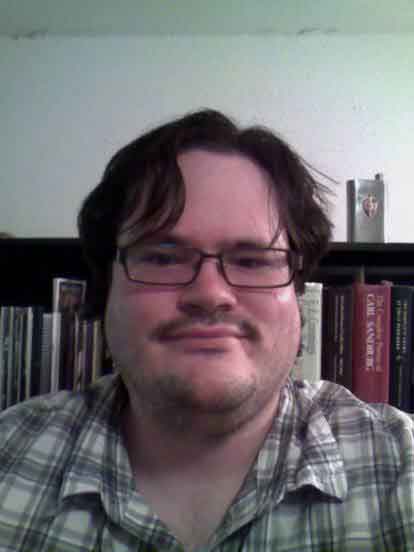 He talks of love and religion and writes poetry that is often critiqued by some as similar to verses from the past. And his role model is from the Renaissance — Michelangelo. To some, he is a loyal friend in need, a person who whips up essays and articles on demand. He is often published within India, which could well be his second literary home. He is prolific with his writing and publishing. He also does paintings and sings songs with a guitar on you tube. Some might have guessed by now — he is Dustin Pickering.

Pickering is the founder of Transcendent Zero Press. This year one of their books, Neon Apolcalypse by Jake Tringali, has been nominated for the Elgin Award 2020 along with names like Ilya Kaminsky, Marge Simon and Brian Dietrich. Pickering is also the founding editor of Harbinger Asylum, which  was nominated for best poetry journal by the National Poetry Awards in 2013. That same year, Pickering participated in Houston’s Public Poetry reading series and was interviewed on 88.7 KUHF. He has been a featured poet for Ethos Literary Journal, a contributor to Huffington Post, and has published essays in Cafe Dissensus, Countercurrents, Borderless, Journal of Liberty and International Affairs, as well as reviews in The Statesman (India), Tuck Magazine, Lost Coast Review, World Literature Today, and Inverse Journal. He placed as a finalist in Adelaide Literary Journal‘s 2018 short story contest, and was a Pushcart nominee in 2019.

His books include The Daunting Ephemeral, The Future of Poetry is NOW: bones picking at death’s howl, Salt and Sorrow, A Matter of Degrees, Knows No End, Frenetic/No Contest, The Alderman: spurious conversations with Jim Morrison, O’Riordan: spurious conversations with Dolores, The Madman and Fu, Be Not Afraid of What You May Find, The Red Velvet Robe, The Forever Abode, and a collaboration with Dory Williams called Imitations of Love Poems. He recently attended New York City Poetry Festival, and has been a reader at Austin International Poetry Festival many times. He hosts the interview and oddities for authors site thedailypoetsite.com. He co-edited the anthology Selfhood: Varieties of Experience, and published its companion Epiphanies and Late Realizations of Love. He has written introductions for books by Amit Saha Sankar, Kiriti Sengupta, Bitan Chakraborty, and Jagari Mukhergee. He was given a Jury Prize at Friendswood Library’s Ekphrastic reading in 2019, and was awarded with honourable mention by The Friends of Guido Gozzano in 2019. He lives in Houston, Texas, USA. In this exclusive, Pickering reflects on his journey as a writer.

Why do you write?

Within me, there seems to be a deep passion and yearning for something inexplicable. I also write to combat doubts, leave a record of my thoughts for myself, and to tell the world whatever interior mysteries I uncover within my own mind and studies.

When and why did you start writing?

Very young. One boring day at home in 1st grade, I asked my grandmother what sort of activity I should do. She suggested I write a story about something I wanted but didn’t have. I wrote a children’s book called The Little Red Wagon about a child who loses a wheel on his wagon. He looks everywhere for it and finds it behind a tree where he least expected to find it.

What form came to you before — poetry or prose?

Prose, but poetry is always more natural to me.

Lots of your essays and poetry have to do with God or spirituality. What makes you weave these into your lore?