A dazzling place I never knew

These lyrics from Disney’s song in Aladdin highlight the beauty and wonder of our lovely green planet which changes with the passage of time. To keep discovering and rediscovering it would be our privilege. To cherish it and enjoy it would be a joy, especially with one’s loved ones and friends. But, reviewing this last decade makes one wonder — are we doing that? Why have we lost ourselves in all kinds of conflicts, including conflicts with nature and perhaps amongst the greatest creation of nature — humankind?

We have had a list of controversial leaders, especially those who denied the reality of climate change and led to worldwide protests from adults and children and those who closed doors to other humans seeking shelter and survival on the basis of borders drawn by mankind. It was also a decade when Yuval Noah Harari saw history as borderless and traced the tribal instincts of our race. Man moved towards making unmanned vehicles and flying to Mars for a holiday.

It has also been a decade that sadly saw violation of women to an unprecedented degree… and yet, I feel, there is a light. Women are learning to give voice and men join them in protesting the violence and rage. They function as humans together… against unfair laws and violence. Harari spoke of how tyranny and communism had been replaced by liberalism — I do not understand isms but I do know that after a thunderstorm, one sees rainbows and clear skies. I would presume the turbulence we see now is the thunderstorm. And after this, there will be a rainbow and a whole new world — a dazzling place!

Let  us welcome 2020 into our midst with hope for a  happy new year and a fabulous new decade!

chinese street food in India
Vibrancy, warmth and colors are what Indophiles find in the India they love. Ruskin Bond, who went as far as to become an Indian, adds to it the love of the hills and the interactions he has with people in that region. He talks of tall swishing trees, hills that beckon and how he made a concerted efforts to return to the India where he spent his childhood from Jersey in the Channel islands, somewhere in between France and England, in his book, Rain in the Mountains:

“One night I was walking alone along the beach. There was a strong wind blowing, dashing the salt spray in my face, and the sea was crashing against the St Helier rocks. I told myself: I will go to London; I will take up a job; I will finish my book; I will find a publisher; I will save money and return to India, because I am happier there than here.”

Ruskin Bond’s own return to India was in quest of happiness much as Indian youth leave their country to adopt USA in their mythical search for a better life, and in that sense contentment. There was a time when those who dreamt big came to India for spiritual succor before conquering the world with the their humongous visions; Bill Gates and Steve Jobs were among these. I am not one to critique moves to different countries in search of happiness, for learning new things or just for survival. Think of it, if everyone stayed forever in the country where they were born, all the human race would have continued in central Africa forever with great to the power millions grandmother, Lucy, and her family…

Recently, I read an article in Hindu, which started with a blurb saying “Travelling in the 50s and 60s, Odia writer Chittaranjan Das realised that the only way to become an Indian was to first become an Asian and then a world citizen.” What a fantastic holistic thought from a writer who thrived in an era where mankind started to stumble under the narrow walls of partisanship and political nationalism!

The article on Chittaranjan Das makes me wonder what I, an Indian-born, consider to be the attributes of those populating the country of my birth.

The simple answer is I do not know.

With a cultural diversity that houses thousands of mother tongues (19,500 in 2018), India remains an enigma to me. Most cultures would have their own distinct rituals and beliefs and each one of them cannot be called anything other than Indian. A simple example would be the stories behind each festival. I know a few around the major Hindu festival of Diwali; some Ram centric, some Krishna centric, some Vishnu centric and, in Bengal, Kali centric — all these are different deities in Hinduism itself. Jainism and Sikhism have celebrations around the same period for different reasons. India hosts more than half-a-dozen major religions with myths and legends modifying the  rituals and customs by local needs. Indian cuisine too is of such a wide variety. It includes an 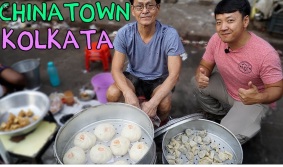 indigenised interpretation of Chinese food, which can be had nowhere else in the world and is a favorite with many in India, a fusion of cuisine developed by Chinese who migrated during the Opium wars and Mao’s regime. Then how can one define food, values or a composite culture that is Indian?

When I read the travels of Marco Polo, I was struck by his mentioning Russians in India and how many races thrived within the region. Of course his concept of India has to be taken with a pinch of salt. We also need to understand his concept of the country could not be what was defined by Radcliffe five hundred years later and accepted by the billions living across India, Pakistan, Bangladesh and the rest of the world without a question. Polo probably felt all cultures outside that of Italian were novelties when he started travelling at the age of sixteen. However, having spent a long time in Kublai Khan’s court before making it to India, he was more likely to be open than most, even if he is regarded as a bit of a charlatan. But one thing that I understood with my reading of Marco Polo was that India was the melting pot of diverse cultures and the geographical definition of India varied, thus making it more a concept than a national entity.

Nationalism as a concept started to develop only around the eighteenth century in England and Europe, after industrialization and French Revolution became a reality. When Marco Polo adventured into Asia from Europe, such travel was rare and long- drawn. With the onset of jet travel, time has ceased to be a constraint for crossing distances. Now it is borders drawn by nationalism. All the borders, of nations, cultures, religions and races are ones that are defined by man, by what twentieth century guru Yuval Noah Harari would probably call ‘orders‘ or ‘tribes’.

The other thing that struck me in my travels within India were sculptures of griffins and sphinx-like creatures introduced into the ancient frescoes of Ellora, an architectural marvel hewn into rocks between 600 to 1000 CE. In the midst of sculptures depicting Hindu mythological lore, a few odd looking creatures that resemble griffins and sphinxes blend into arrays of elephants. How and why did these get here? Did at some point a worker travel across to India from Africa or Europe, carrying with him the concept of a griffin or a sphinx and hew it into the rocks of Ellora? Was such travel to find work in multi- cultural India a norm in those days, when even Marco Polo had not set foot in China?

Again, I do not know… but I do love Chittaranjan Das’s perception that to be an Indian is to be a citizen of the world; Tagore’s perception of the mind being a fearless entity that would look for larger answers than just nationalism, being above narrow, parochial thought processes; Bhupen Hazarika’s concept of being a wanderer which he put to words in his well known song, Aami Ek Jajabar(I am a wanderer)

And in this spirit of openness and multi-culturalism, I celebrate my own humanness…